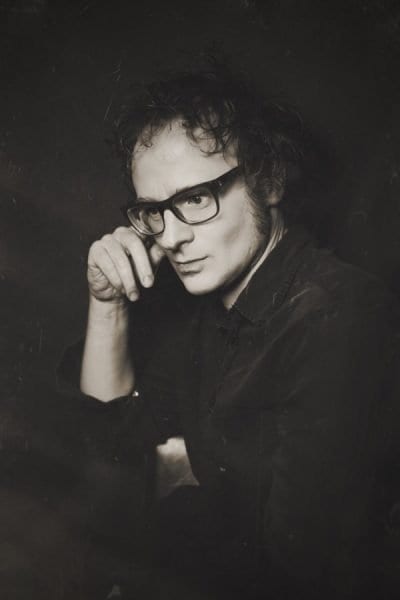 Ethan Gold is returning to the stage with a trilogy of LPs. The first Earth City 1: The Longing, is arriving across all platforms and countries during 2021.  Gold will be playing a few solo shows in Germany in November and December.

On EARTH CITY 1: THE LONGING

While the three Earth City albums fit together as a piece, each has its own thematic concerns. The first album explores “the longing” — our fascination and alienation amidst the connections and disconnections we all experience in the highly complex 21st century world. It’s fitting that longing is the focus of the trilogy’s opening because longing is, as Gold describes it, “the first step of yearning that drives us inward and forward into the most profound experiences of living. Doubt, searching, and loneliness are motivating principles that bring us towards others, and they bring us towards grace.”

The trilogy’s title, Earth City, reflects a certain civilizational yin-yang existing today, with the world becoming more connected digitally yet people feeling more alienated and disconnected than ever. While these themes of isolation and dissatisfaction among people might seem spurred by the pandemic, Gold had this project in the works long before COVID-19 appeared. Still, he acknowledges that “the same impulse that drove me to construct this trilogy is connected to same stuff that caused the pandemic: excessive, unconscious interconnectedness, and the hole this creates inside people.”

Over the album’s 11 tracks, Gold takes listeners on a stimulating musical journey that explores aspects of personal relationships, romance, self-worth, and community, and his lyrics frequently operate on several levels. “Storm Coming,” for instance, concerns both romantic yearning and environmental peril. “Alexandria & Me” refers to a purportedly haunted old hotel in downtown L.A. as well as the ancient Egyptian civilization Alexandria, while “It’s Okay, Sid” is an ode to Gold’s uncle and to cities that are overlooked and unappreciated as Sid was.

The music, similarly, works on multiple layers. Gold weaves together a vibrant soundscape, drawing from elements of alt rock, Eno-like sonics, and folk music that sometimes serve to enhance the lyrics and other times act as a counterpoint. The gorgeous pop fueling tracks like “Bright & Lonely City” and “Our Love Is Beautiful” can shift attention from the lyrics’ darker aspects. A Spanish guitar softens the confrontational electro-beats in “Firefly” and the disquieting secondary vocal track on “In New York” plays off the more romantic lead vocal, lending a feeling of disillusionment to this pretty piano ballad. 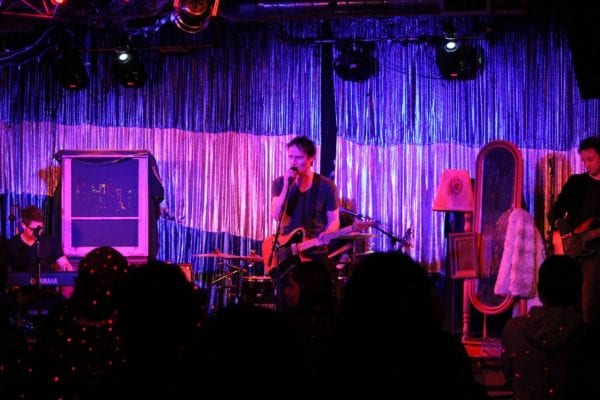 Earth City 1 represents Gold’s return to performing, and the first full-length album of original songs since Songs From A Toxic Apartment, his highly regarded debut (Pitchfork; Sunday Times London, LA Weekly, etc.) The chief reason behind the break was a head injury from a fall at a warehouse party in Brooklyn, NY that left Gold living without his cognitive skills and ability to communicate. Although experiencing a period where he was unable to utilize all the personality traits we generally define ourselves by, Gold continued making music, and says “my soul was still very much there and I could feel it there the whole time.”

As it was in a San Francisco childhood marked by family tragedy (his mother was killed with concert promoter Bill Graham) and personal trauma (other articles have covered this and Ethan was reticent to discuss), music once again became his primary healing technique. Playing different instruments were major activities that helped him rewire his brain. Gold, then living in New York City, also would sit in a nearly empty cathedral on Broadway listening to Bach organ music as well as visit Tompkins Square Park to hear Puerto Rican and Cuban drummers jamming. “Just sitting and listening,” he reveals, “allowed me to rebuild my neural pathways.”

Once he began writing songs again, Gold discovered he was able to tap into a simplicity and directness that wasn’t there before. For many years, he has written his songs largely in his sleep and then put the finishing touches on them during the daytime. “What I try to do when I write is connect to my muses who speak to me and they speak to me largely through dreams,” he explains. “But since the head injury, I have found that my connection is even stronger.” Rather than tinkering over his songs, Gold says that he now typically finishes the words and music before breakfast. “Part of that is my sense of purpose and mission with what I’m doing is very strong. I know why I’m doing what I’m doing.” 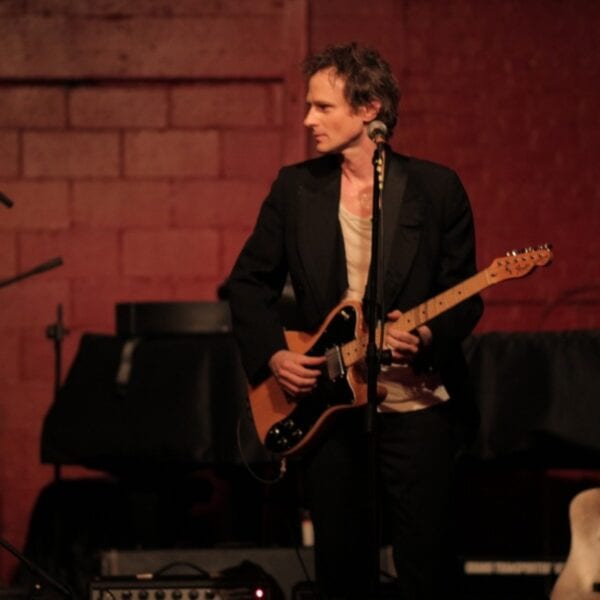 After having performed, recorded, and mixed his debut album at home, Gold focused on many of the keyboards, guitars and bass this time around, but wanted other musicians and mixers to bring a wider energy to the songs of Earth City, with their global perspective.

Even before making Songs From A Toxic Apartment, Gold received accolades for producing and arranging Elvis Perkins’ influential Ash Wednesday album. More recently, during his recovery time off-stage, Gold composed acclaimed film scores for Don’t Let Go (Universal/Blumhouse) and The Song of Sway Lake (directed by his filmmaker twin brother Ari, and featuring John Grant and the Staves singing Ethan’s songs). He also released two highly praised oddball collections, Expanses (Teenage Synthstrumentals) (“Charming stuff with an innocent, pre-sequencer, handcrafted feel that pushes primitive analogue instruments to their sound-warping limits” – Uncut; “This is about expressing the voice of God through the only means that we have to on this humble planet of ours.” – Skope Mag) and Live Undead Bedroom Closet Covers (“Rather fantastic” – The Crack; “Often brilliant cover versions” – Shindig!).

In releasing his Earth City trilogy to the world, Gold is happily embracing that he is flying in the face of current trends. “Music has become such a disposable art form. Why can’t music take on big topics in a slow way – making something that will reward you with time and patience?” he asks, adding “Why does music have to be like lighting a firecracker? I prefer a river to firecrackers any day of the week.”

Underground songmaker and music artist Ethan Gold has just wrapped recording for his upcoming record, a double-album Earth City which explores themes of longing — for human connection, for romance, for nightlife in the city, and ultimately for connection to the threatened natural world. To coincide with the first climate strikes, he released an advance video for one of the environmental songs from the album, “Never Met a World Like You,” and performed for the first time after his 2013 head injury, at three Los Angeles rallies in the final months of 2019.

During several years of convalescence, Ethan has been quietly making a lot of music, most recently, the glitchily gorgeous score to the Blumhouse supernatural thriller Don’t Let Go, released in autumn 2019 on Universal / Back Lot Music. In late 2018 Ethan released a soundtrack to his brother Ari’s second feature, The Song of Sway Lake. 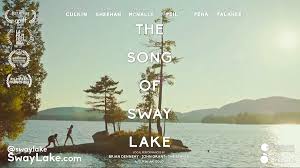 To match the tale of the decline of an aristocratic family and the golden light of late summer on an Adirondack lake, Ethan’s piano-driven score is an emotional force of water and silence, dreams and nostalgia. The soundtrack album also features multiple renditions of Ethan’s original title song “Sway Lake,” including versions sung by John Grant and The Staves, arranged and produced utterly convincingly to sound like lost pop recordings from the late 1930s and ’40s. 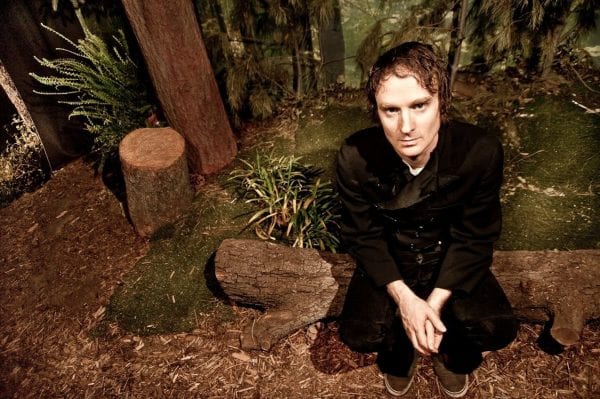 Also released in 2018 while Ethan was not playing live shows was the much-praised naive electronic album Expanses (Teenage Synthstrumentals) (“Primitive analogue instruments to their sound-warping limits” – Uncut; “Wildly diverting… by some wide-eyed, sun and acid-baked LA wunderkind” – Electronic Sound; “Records like these are my reason for getting into independent music in the first place” – Skope Mag; “I can say with complete confidence that I won’t hear anything quite as original… If you think it’s absurd to even suggest that a devotedly experimental, avant-garde artist could have such a reach, I would encourage you to have a listen to some of Lou Reed’s earlier solo work and reassess your opinion… More authentic than anything you’ve heard on FM radio in your life” – Vents Magazine.) Gold also returned to early influences and completed an album of live covers of mostly new wave tracks, from New Order and Bauhaus to Of Montreal and The Knife, as Live Undead Bedroom Closet Covers (“Unhinged but weirdly compelling” – Uncut; “Brilliant cover versions” – Shindig!; “Rather fantastic” – The Crack).

Gold first stepped into public consciousness when he produced and arranged his friend Elvis Perkins’ blog-hyped debut Ash Wednesday, one of the most influential albums of the modern folk-rock resurgence.  After moonlighting as bass player in his brother Ari’s New York folk party band the Honey Brothers, and scoring his twin’s debut feature, the epic air-drumming comedy Adventures of Power, Ethan began honing his intensely personal style while living in a dilapidated flat in Los Angeles. He released his debut art-rock album Songs From A Toxic Apartment in 2011 to underground acclaim (“Emotions delivered with an unfiltered, glaring legibility”- Pitchfork; “The most interesting record I’ve listened to in the past 5 years”- Rock N Roll Experience.) He then began rolling out a series of videos from the album showcasing his visceral approach, which led him to side work as a video director. He was working on a film score and his follow-up album when he suffered the head injury in 2013. Through a long recovery, he now credits the temporary dissolution of his cognitive ability with an upgraded inner power and creativity, and a clarified mission: in a world that seems more and more combative, bringing sensitive people and quieter things — music and poetry and the living earth — back into their magnificence.

Gold was raised in San Francisco, during the long extended hangover after hippie times in that city. His father is Beat author Herbert Gold, and his mother Melissa was a collaborator and last girlfriend of legendary concert promoter Bill Graham, and was killed with Graham in a helicopter crash. A childhood of constant change and chaos may have led Ethan to the unique way he approaches music as a balm and a life meaning-maker.  Today he lives and dreams songs, writing about half his music while asleep. Earth City will be both a much-anticipated step forward for an artist whose path has been curved by inner impulse and by fate, and a return to the essential path of his original vision. He jokes that his mission is to “make sensitivity cool again.” But we can tell he’s actually not kidding. He’s willing to be quiet enough to paint in songs the delicate details of the modern age, and willing to be strong enough to fight for the world as it could be.