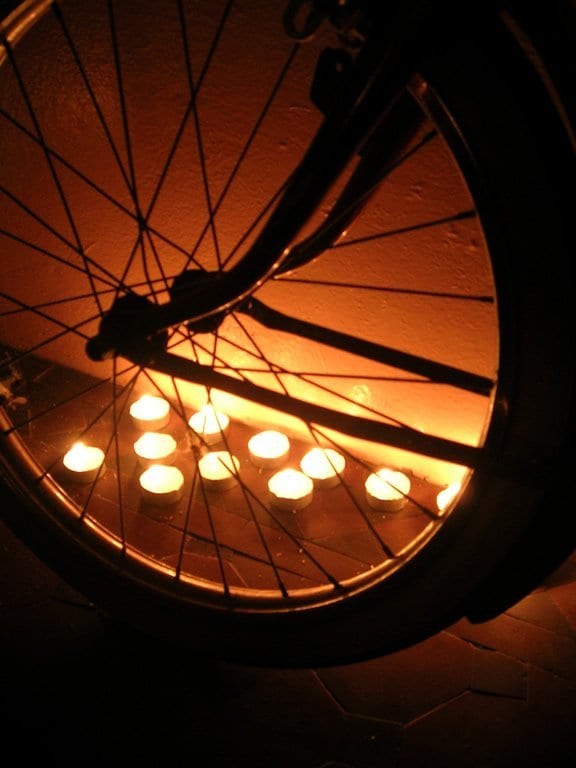 riding through the streets of echo park, on a tuesday under streetlight.  halloween is coming and the houses are decorated with ghosts and gravestones.  the only sound is the rolling of the tires.  i’m on my mother’s bike.  hope her ghost’s not mad about what i said.  there’s no sign of human life, just houses and more houses.  staring at architecture is nice but it’s no way to cure loneliness.  the occasional flicker of a television set on a dark living room wall.

i moved to the east side after paying off birthguilt in a borderland where i’d escape the pit bull breeder’s whimpering charges next to my painted box and ride into south central knowing no-one would bother a weirdo with a helmet riding through the streets without a dollar in his pocket. but now I’ve achieved the land of the hipsters and these people maybe should be my friends but here i am still listening to the rolling of bike tires at midnight in a city that eats the days away without a sign or a season to remind you that days become years.  but at least the moon is red tonight and i can get into scaring myself cuz it looks like electricity is the only life around here.  it’s not so late for everyone to be asleep is it?  maybe everyone’s dead and they died with their tvs on.  but i spill out of ghostland on to sunset and there’s a cafe i play at and there’s people spilled onto the corner and maybe i know people there right now so on the other side of the street i roll by and look and there’s the same crew i’ve seen before but i’m not one of them so i don’t stop, i’m just as far from them as i was when i lived in the toxic borderlands.  but the garbages are all pulled onto the side streets where i weave towards home and the smell of hundreds of families’ rotting food gently clouds the quiet streets in orange and purple puffy clouds that remind me of new york in a damp summertime.  so i guiltily inhale deeply the oranges and meat and discarded cleaning products as i pedal harder over hills.

the world is receding from my grasp
i’m just rolling on the surface unconnected unattached
like a fly or an electron
these thoughts can make you crash
so to break the spell that won’t be broken by any gentle spark of lightning or the echoing roll of thunder or the soft tears of rain that would make it so much easier to kiss someone so the smarter part of me crashes easy four steps from my door. so i lay under my bike and let sweet pain wake my body in a circulating throb moves through arms and shoulders and listen to the spiders building webs between leaves and pavement

Pictures from the Satellite