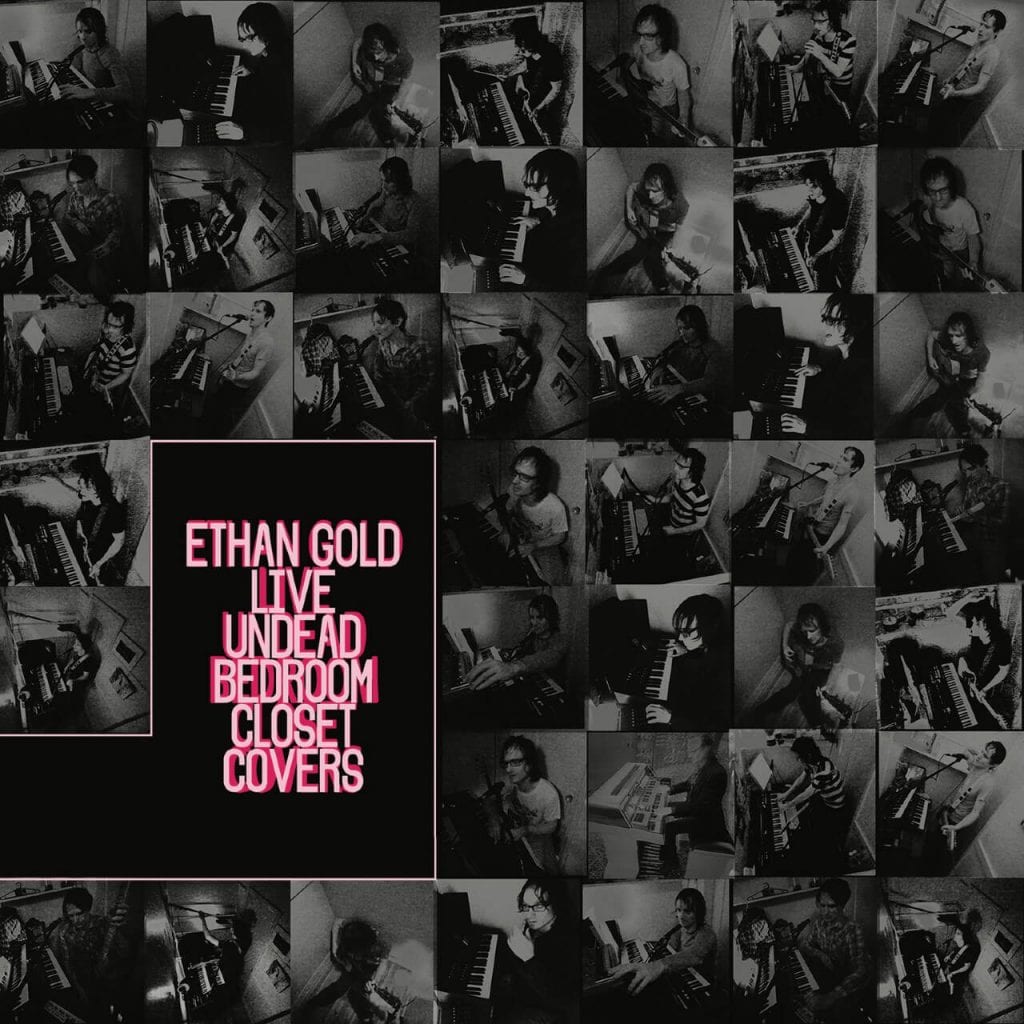 Whilst recovering from an injury and preparing the true follow-up to his debut Songs from a Toxic Apartment, Los Angeles-based performer/composer/producer Ethan Gold releases Live Undead Bedroom Closet Covers, a mostly earnest, at times cheeky album of live home recordings of some of his favourite music. Most tracks were performed employing looping and filmed with a camera strapped to the walls of his bedroom closet in the flat he escaped to after the ‘toxic apartment’. This is not your usual covers collection, rather a raw, full-colour snapshot of the working process of one of the rising American underground artists to watch.

During this ‘rebirth’, Ethan has been digging up an album of synth-strumental paintings, completing this collec-tion of live covers, and finishing the score to the upcoming The Song of Sway Lake, with his songs being sung by John Grant and the Staves.

Track by Track according to the artist himself…
/over
1. Ramases – ‘Balloon’
I was asked by some friends to contribute to a tribute to the late great English cult psych band Ramases. I hadn’t heard them before, but went deep into their spirit, and converted their jangly visionary rock into something wobblier. The world has gotten wobblier since the 70s. You can’t play bass, sing, and play multiple recorders at the same time, and the song structure isn’t looping-friendly, so this is the only non-live track on this album.

2. Talking Heads – ‘Born Under Punches’
I don’t know what this song ‘means’ but a well-functioning brain like David Byrne’s soothes me, (and by the way, has anyone else noticed that Brian Eno is an easy anagram of ‘One Brain’?). Like many of these tracks, this was a 4am affair, so the whole feel is softer than how Talking Heads usually played it.

3. Empire of the Sun – ‘Walking on a Dream’ / Tom Petty – ‘Learning to Fly’
Tom Petty (RIP) got mad at corporations stealing his music, not at musicians who did it without realizing it. I noticed the chord progression in ‘Walking on a Dream’ was identical to ‘Learning to Fly’, and the two songs felt like they shared hope as well, so I medleyed them.

4. The Knife – ‘Forest Families’
The great, gloomy brother-sister duo I imagined in dark cold Swedish nights, heat on high, lights on low. Raised in different wreckage than I, but we all escaped into music. I fell in love with keyboards again doing this. I read that Olof used FM synthe-sis, but I took my Juno-60 arpeggiator to a twin place.

5. Bauhaus – ‘Bela Lugosi’s Dead’
I once saw Daniel Ash outside a corner store in Topanga Canyon, he on a motorcycle and I on a bicycle. Which is a good met-aphor for this version next to the original. Acoustic guitar & harmonica are pretty un-goth, but my dim closet would have made perfect bat’s quarters.

6. Hair – ‘The Flesh Failures’
The composers were older than baby boomers, but I blame the boomers for a lot of weird parenting. On the bright side, my mother used to play the soundtrack to Hair. In the play, this song is triumphant and heartbreaking, with a huge cast shouting the climax. Alone it’s alienated, but some sunshine came through the electricity.

7. New Order – ‘Age of Consent’
A gateway drug to the Cold War and a balm for the burning blue soul. Kraftwerk made by humans. A pretty faithful arrange-ment here since New Order’s grey sound is such a part of my love for them. My first time making loops live. I mess up towards the end of the video version & give a guilty look, but Sumner generally looks a tad upset when he plays, so it’s ok.

8. The Byrds – ‘I Am a Pilgrim’
I confess I barely know the Byrds. Someone asked me to cover this song. I guess I’m psychically beating up hippies & Califor-nia again. I was listening to a lot of Einstürzende Neubauten at the time, which you might hear in the one-note bass.

9. Nirvana – ‘Floyd the Barber’
I think I read in Nick Soulsby’s book that Kurt wrote this off-the-cuff, but it seemed like a real explosion of childhood rage, which spoke to me. I loved that Melvins-y early Nirvana. Sludgy riffs, so satisfying to play on guitar, but at this point in history an old keyboard with a right hand & a drum machine punched live with a left felt more unhinged.

10. Devo – ‘Gut Feeling’
With a new short haircut, it had to happen. ‘Are We Not Men’ was one of the first vinyl albums I stared at as a kid. I used to shake it from side to side, making that goofy head dance. The most athletic performance on this record. I had to rehearse a lot to get all the instrument switches.

11. Of Montreal – ‘The Past is a Grotesque Animal’
Another one where the original arrangement is so right I just cover it faithfully, other than scrambling some of my life into the words. This long song works well for loop-making, since the instruments come in one gradually & the chords repeat. I had the bass on a shelf, and to get it all in frame I strapped the camera into the upper corner of the closet and used a wide angle, which made it look way more spacious.

12. Bauhaus – ‘Bela Lugosi’s FunMachine is Undead’
A friend had a FunMachine. Such a large instrument for such an absurd sound. My brother Ari made an equally absurd video for this — we snuck into an upscale hipster hotel in downtown LA and I played their ironic organ until we were asked to leave. I wonder if they ironically spray asbestos into the cottage cheese ceilings, to really nail that retro chic. My apologies to Bau-haus, it’s not their fault.