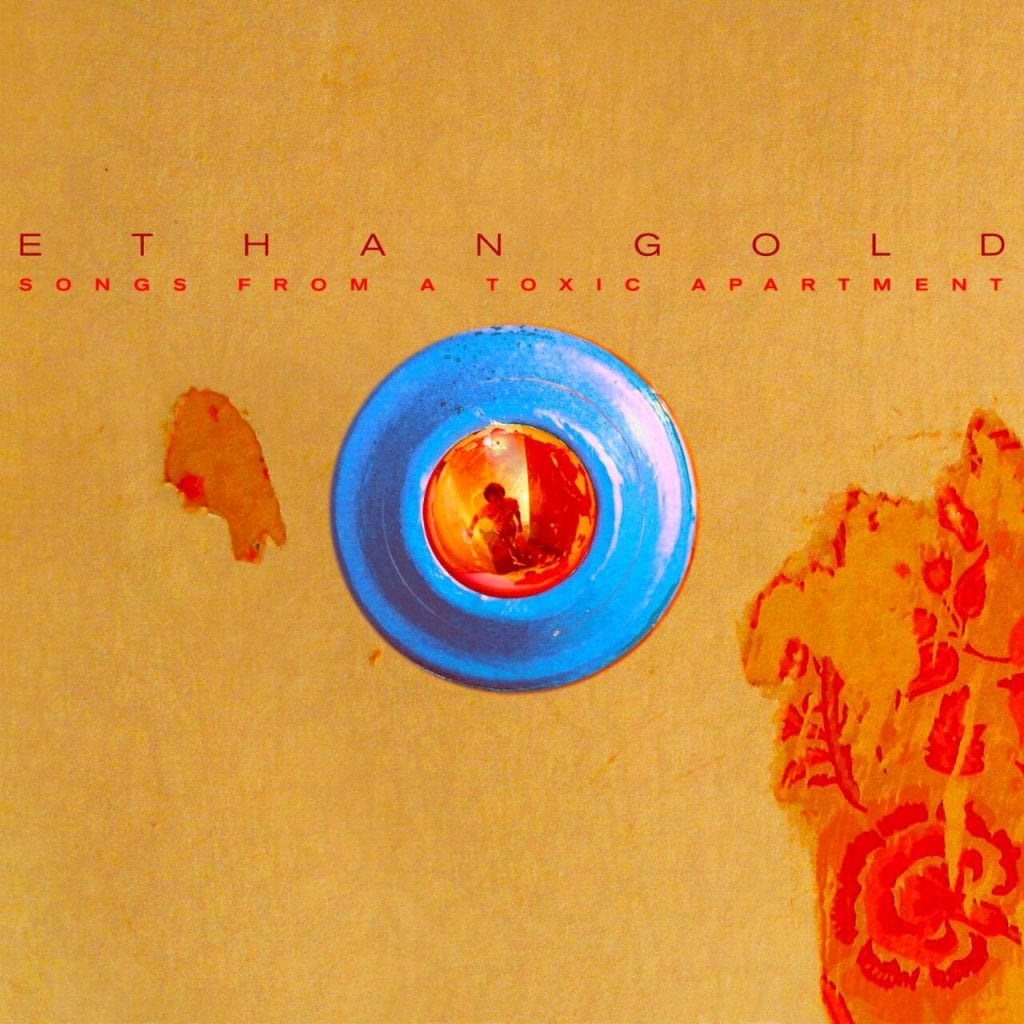 CC:  Hi, Ethan, So, Sextortion is inspired by a real high school “sextortion” (sexting plus sexual blackmail) scandal, the “Tony Stancl case,” which embroiled a small town in Wisconsin about six years ago, near where playwright Patrick Thomas McCarthy grew up. This has absolutely nothing to do with Songs from a Toxic Apartment, yet it feels as if the songs were written on commission for the play. Songs that appear in whole or in part or in their alternative mixes in the play— “Poison,” “Nonstop,” “Tonight”—really feel like ours. How do you account for that?

EG:  Serendipity, and, that while I was writing these songs, I was working on a rock opera dealing with some similar themes.  It was largely about how boys become monsters, through the pressures of growing up, and dealing with their own feelings of guilt, and sexual confusion, and estrangement from female energy.  A pretty grandiose concept that got too big for me—I couldn’t take on metal, gangsta rap, war, peer pressure, alienation all at once. I put the opera on the backburner and focussed on releasing a more human debut, but the songs were being demoed at the same time, and some of those lines got blurry for me between the projects as I was working on them.  So it doesn’t surprise me at all that Songs From A Toxic Apartment fits this play so well, considering your themes.

CC:  The album feels like a song cycle to me; it has the discursive freedom within a sense of wholeness of a work such as Schumann’s “Eichendorff” Liederkreis, a score I love and hope someday to choreograph (I hope that analogy does not seem too recondite). There is clearly a protagonist, the “I,” and the album is clearly his story. Yet you tell me that the songs originated more or less as outtakes from a rock opera in progress. What’s the story behind all that?

EG:  I wouldn’t say they were outtakes, exactly.  It was more a matter of just being prolific and deep in a writing process, where whatever I needed to express was coming out through songs.  It became my medium of expression.  And I was demoing scores and scores (pun intended) of songs for the opera, so I just demoed a bunch of more personal songs that were probably being dredged into my consciousness by what I was doing with the rock opera, and those demos became my debut record.  I did have to work hard to sculpt the mixes so it felt like a united song cycle.  I still believe in the long form. I believe in attention. But the “Toxic” songs are more about memory and hope I suppose.  But there are in some cases songs where multiple voices speak – a mother, a father, an inner voice, a public voice.

CC:  One of the most remarkable aspects of the album is the treatment of the vocals. Can you explain how as a singer and engineer you achieved certain of the effects, which fascinate me? The gritty sound of the voice in “Nonstop” for example—is that a baritone drone harmony in the same rhythm as the lead? You seem to have spent a lot of effort on the stereo placement of the voice, the vocal harmonies, use of compression, and other effects—I’m kind of fascinated by the technical aspects, and their emotional results. You say you hate engineering, but you’re damn good at it, I think.

EG:  Thanks, although I’m trying to get away from that these days, as I really don’t like engineering and producing myself these days.  It makes my brain explode.  But yes, the vocals were produced first to sound decent—whatever I could do to please my ears in mixing, as nearly everything on the record was recorded through the same signal chain—one mic, one pre-amp, one compressor, into an ancient Digi001 ProTools rig running on OS9!

CC:  I told you I wanted to ask you some geeky questions.

EG:  I like geeky questions about engineering way more than I like engineering.  But yeah I really tied my own hands with severely limited tools, and then did my best to make clarity sonically.  But sonic clarity is secondary to clarity in intention.  You have to know what you’re going for.  I usually knew when the voice was the “real” me, and when it was inner voices yelling at me, or the voice of parents, or dream lovers.  Even though it was all my own voice singing . . . which feels true, right?  The outside world, the people who jostle us, inspire us, haunt us, beckon us in the world are filtered through our own experience.  So for example, yeah, on “Nonstop” there are multiple characters.  But on this record I also always wanted it to sound like a vulnerable human, which it was.  So I didn’t use other singers or process the voice much at all, or sing too extremely in character. I did it more through vocal arrangement—octaves, harmonies, panning, a little delay and reverb.  Very basic stuff but always knowing what each voice meant.  So there’s the flat, sort of alienated robot-masculine voice of the John who feels shut off by girls and goes to prostitutes, and there’s the prostitute, who sort of takes over in the second verse.  She’s kind of more powerful than he is.  But then there are also some harmonies that I sing in a sort of femmy voice, which is more of the sound of the girls mocking the John in his head.  I played with all this a bit in the video for that song.  Have you seen it?

EG:  You have homework when you get a breather from the play.

CC:  I will. . . .  Ok, more non-geeky questions. . . . I’m a life-long insomniac, since before birth. I wonder, based on “Why Don’t You Sleep,” what your relationship to insomnia is. And your mother’s relationship to your insomnia. . . .

EG:  Ah, are you mocking the old therapy cliché, “tell me about your mother”?  I’d rather not talk about her, thank you very much.  You know about “Helicopter,” you know she died kinda young.  My insomnia goes back to very early childhood for me, well before that.  My earliest memories are all nightmares, from the ages of two and three.  I actually wrote stories featuring them when I was four.  To this day I write from sleep.  But yeah, sleep’s never been easy for me.  There may be in-family causes, but a lot of things have multiple causes.  Whatever went on at home would have affected another being differently.  I notice or feel what’s happening around me in a raw electric way, or I certainly did then.  This may have physically or spiritually predisposed me to insomnia, since before birth, like you maybe.  I’m sorry to hear that!  Though perhaps it drives your art.

CC:  Well, my not-for-profit is called Can’t Sleep, Inc. . . . My sleeplessness is theme of some of my work, but not exactly its source. It is a big part of my identity I would say. Speaking of sleeping, “Isis Sleeping” is one song that I could not use in the play, but I love it. It actually makes me think of Circe and Odysseus, or Orpheus and Eurydice. I believe that there was syncretistic cult of Isis and Apollo in the late Roman Empire. What were you thinking when you wrote the song?

EG:  I did grow up reading illustrated Greek myths!  That’s about the extent of my knowledge, so in a really vague way I was influenced by that.  But I’m hardly an expert—you’ve just surpassed my learning with your question, so I can’t even answer you.  But the idea of a female sleeping figure, both in myths, and in the reality of modern life come into that song.  Isis is both the dormant female with a capital F, and also, real women.  Women who feel they haven’t been able to express their femininity, that it’s shut within themselves, just like they’re shut in, in lonely little rooms around the world.  This song is for those real people and for the female within everyone, that’s why I end the record with it.

CC:  Well, I have not been so into a non-classical album since R.E.M.’s Automatic for the People—”Everybody Hurts” got me through a really hard summer way back when. Your songs have woven their way into my entire production. Thank you for that.

EG:  I really enjoyed seeing the play last night, Christopher.  You, and Patrick McCarthy, and the whole cast did a fantastic job.  It’s a big range of characters you brought to life.  They’re all variations of how self-doubt and sexual fear and desire can get scrambled into myriad shapes in high school, a lot of them not pretty.  But there are no bad guys, which I loved.  Repression is the bad guy.  Such social pressure at a time with such hormonal pressure!  Agh!  High school is awful.  But the play’s great and I wish you all success.  It’s an honor for me that you made my record a little part of it.

CC:  Thank you, and thanks for answering my questions, the heavy ones and the geeky ones.