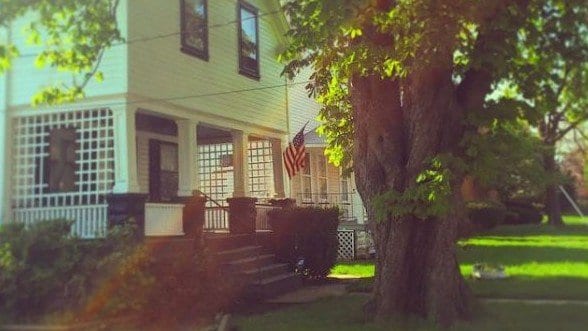 The only difficult entry to any country was into mine. It was both the least formal and the most aggressive immigration staff of any of the countries I’d entered. Got held in a small room at JFK while an immigration officer spoke to the tired and waiting held-up elect (us) thusly: “Are you two years old?! Didn’t I tell you to PUT! AWAY! YOUR PHONE!” while other officers, stuffed into the uniforms ready to burst from diabetic diets, shuffled about jovially. It all felt very casual…. When it was my turn at some random moment, I got questioned about why I went to so many countries. After some suspicion apparently the magic words were “art project”. I guess they figured a drug dealer or global pornographer wouldn’t demean himself with such an alibi, and they let me go, just in time to make my connecting flight to Cleveland.

City of my father’s youth, Lakewood, Ohio. It looked like America, the one you read about, the one in postcards from the 1920s, the one where kids play on porches and run in the street, and older folks complain about the immigrants, and talk nostalgically about their immigrant parents. But after going nearly the whole way around the world, jumping back into the east side of my home continent, I couldn’t help feeling this country has got a lot right, integrating people from around the world into its idea more seamlessly than the Scandinavians or the Japanese, certainly. Little businesses open, people wander and eat and stroll and bike on a balmy spring evening. The young middle aged women working at the diner, voices charred from cigarettes, kiss my old middle aged dad (here to be feted by the Lakewood Public Library) since they know he’ll like it….

Near downtown Cleveland walking with my father and uncle, along Lake Erie, out on a rocky jetty the waves were gentle and the warm breeze blew, looking like the sea but with no sea smell, no salt, no smell at all except that of the warmth of a middle American summer coming on. We met a woman T. meditating out on the rocks. She wasn’t wearing the outfit of a yogi; she might have been on a midday break from an office job. The fabric she wore wasn’t natural fibers, but the swirling patterns on her clothing gave a tiny hint about the organic connection to the natural world she’s building in her non-mind out on the edge of downtown Cleveland.

Severe jet lag is starting to build, or more precisely, sheer exhaustion. My sleep pattern is in shreds at this point. “I’ve been getting up earlier than I go to bed” as my uncle Robert said. But I’m still talking to strangers for “Our Love is Beautiful”, and frankly sometimes I’m not in the mood to do this. And when I force it, and am too tired to raise my eyes in human connection and wit, it’s just awkward. Maybe seeing my father made me regress temporarily, the reaction many of us have around parents. All the social skills fall off and we behave like we did before we learned them. I can’t learn to eat as slowly as he does, but I can learn to awkwardly talk with young women at a restaurant. Oh dear, I think I need some sleep, I’m too tired to communicate properly….

On to Nashville, a city I just came to for the first time this year. I want to return to my surprise. Despite or maybe because of vacations with my step-family on their ranch near Redding, CA as a child, going to rodeos, getting bucked off unridden horses, hearing Rush Limbaugh for the first time anywhere when he was just a small local band, country music always felt like another man’s country to me as a boy. But Nashville, like Ohio, has that calm slow feel, American spring. No coastal breezes, just gentle air blowing around the middle of these States. And Nashville is a city where the craft of songwriting itself is honored. Little signs go up on the narrow streets outside the publishers’ little houses, congratulating their guys when they get a hit on some country star’s record. Well frankly I wouldn’t mind if the rock world were a bit more like this. So between wandering downtown and meeting players on the street, worn by the sun, I wrote some country songs. I didn’t have to try, either, the smell of the food and the earth brought them to me.